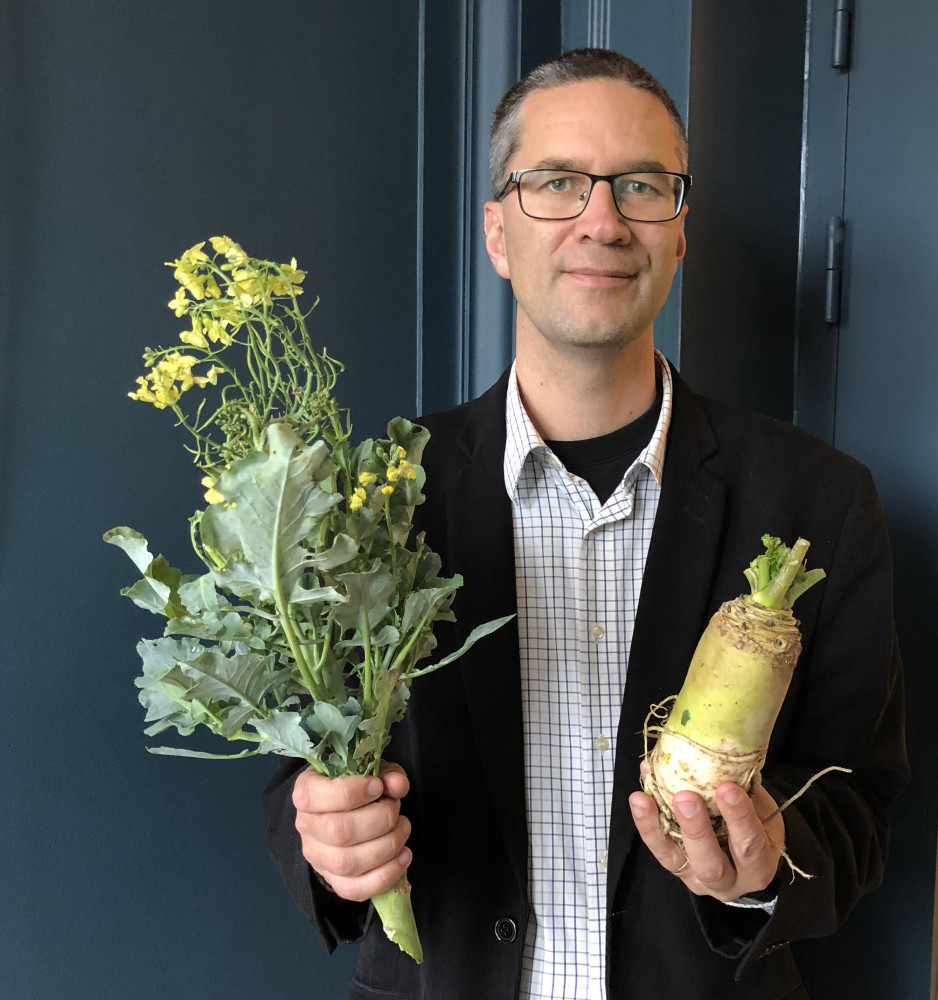 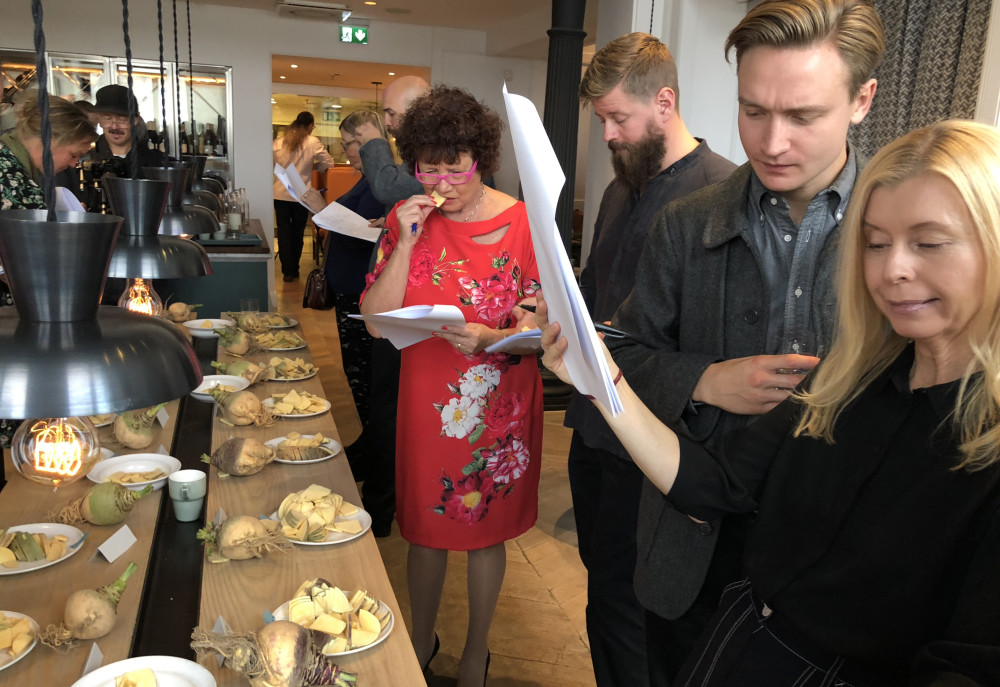 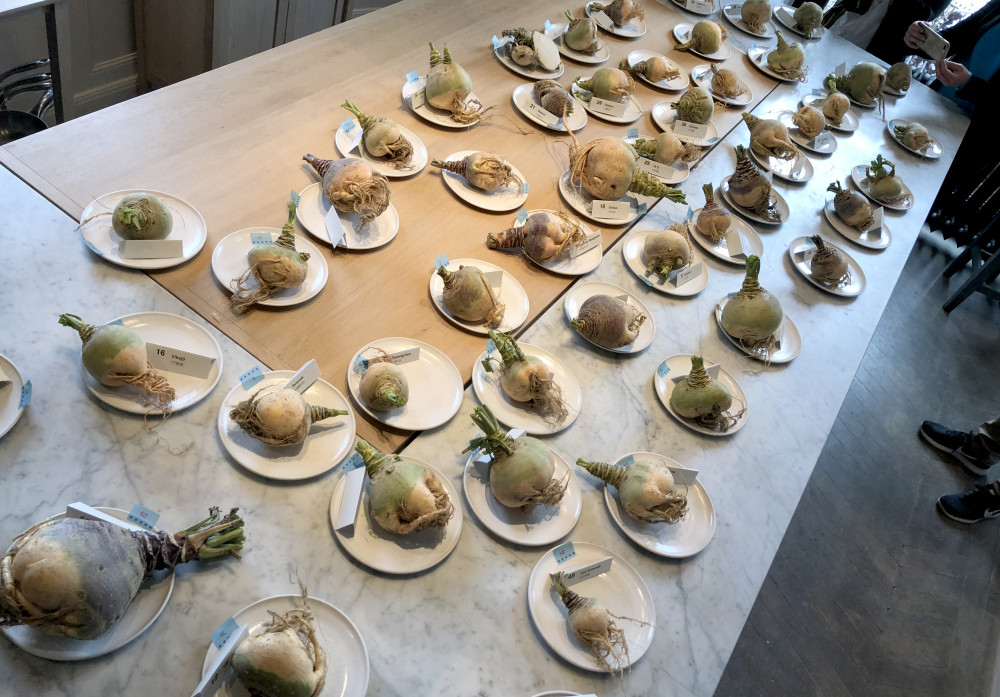 Sometimes miracles happen, and just this weekend a skilled foodjournalist managed one: Maria Canabal brought women from all the world together to Parabere Forum to discuss how to improve gastronomy with womens vision.
1st. and 2nd. march 2015 about 300 women, (and even some men), came together in the impressive building Alhondiga in Bilbao, to inspire and get inspired.

It seems that we Swedes are particularly interested in the questions of women taking more space in gastronomy, because we managed to get a group together that was definitely not proportional to our small population. It actually became a joke during the forum where everybody was referring to being swedish or not.
We are certainly proud to bring the best, as in the picture beneath, which shows some of the Swedish Goddesses of Food: Chef Sara Wicklin at Urban chef, chef Fia Gulliksson, also entrepreneur and journalist, chef Lisa Lönner Pulkkinen, sucessfull owner of Husmor Lisa in the Archipelago of Stockholm, Titti Qvarnström who last week could pin her first Michelinstar at her restaurant Bloom in the Park in Malmö, and Katja Nyqvist, chef at popular restaurant Jazzköket in Östersund.

And here are some of the fabulous women we met:

Chido Govera from Zimbabwe grew up as a poor, hungry and abused orphan, but at 10 she decided to find a way to provide for herself and her brother. She invented a smart system where the leftover from the coffeeproduction successfully is used as fertile compost to grow mushrooms. At 12 she was already studying mushrooms at university. Now she runs the expanding project Future of Hope where other orphans and poor children can learn how to make a living through growing mushrooms.

This woman was presented with the words ”if earth was a woman it would be Vandana Shiva”. Wow. Yes. Of course she did not let us down, passionate and full of energy:
– Women have through history cocreated with thousands of varieties of plants – now it is time for ecofeminism. Humans companions are the mais, the pumpkin and the bee.
– How did humanity become stupid suddenly saying let’s have more food with less nourishment and more toxins?”
To make a long story short, many of us were weeping at the end of her speach.
Jessamyn Rodriguez baker and social entrepreneur with the sucessful project Hot Bread Kitchen in East Harlem New York together with Maria Printz, baker and entrepreneur at Printz bakery in Sweden.
Jessamyn realized that out of 3 000 bakers in NY, only 50 were women.
– I made it my goal to BREADUCATE and get unemployed immigrant women into the business of baking. East Harlem has the highest amount of unemployment but it is situated very close to areas were people have high income and they will pay for quality bread, she explanes.
Maria runs a high quality hotdog+bread festival which attracts many thousand of visitors and gives income and energy to the small village of Stallarholmen where she runs her bakery.

Isabel Soares invented the project Fruta Feia or Ugly Fruit managed to stop the foodwaste in her homeland Portugal and created a project that now is used as inspiration to take care of fruit and vegetables all over the world. She simply does not accept that food is discarded only because of their looks.
– We consumers have a choice, and it is time to say stop to the segregation, says Isabel who works together with voluntary people and helps starting Fruta Feia cooperations all over Portugal.

Another Heroine of Food is Gayle Quarmby who manages the almost impossible project Outback Pride, which empowers and sustains the aboriginal people in the remote dessert of Reedy Creek in South Australia, through growing traditional herbs and plants. But it is not charity.
– The young aboriginals come and beg: ” Pleaaase give me 20 bucks”. No way I tell them, but here is a showel. Now you can go and earn 20 bucks. That`s why we call it OutBackPride, Gayle says.

Together with her inventive and botanically skilled husband Mike, who she lovingly calls”Handsome”, Gayle has built OutBackPride into a company that sucessfully sells herbs and greens to the topchefs of Australia.

Memorable also to party with the topchefs of New York, like Elisabeth Falkner and Dominique Crenn, eating oysters at Puertito three days in a row and at the very end of the trip, visiting restaurant Nerua. Listening to the cool danish chef Kamilla Seidler who runs the famous Gusto restaurant La Paz, Bolivia, where they run a Gusto School for young people at risk. And five days in constant discussion about media, marketing and feminism with women like Carro Tallving, owner of the very conscious foodstore 8T8 in Stockholm, made me grow!

It feels totally appropriate to end all this with a quote from the powerful exhibition of Niki de Saint Phalle that recently opened in the Guggenheim museum:

”Communism and capitalism have failed. I think the time has come for a new matriarchal society. Do you think that people would continue to die of hunger if women got involved? Women who give birth, who have the function of giving life – I can’t help but think that they could make a world that would be happy to live in.”

Couldn’t agree more. And, yes ladies, I will be there next year!

All photographs: Anna Lind Lewin
(except Maria Canabal at the beginning).